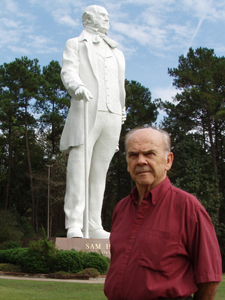 David Adickes was born in Huntsville, Texas and is the creator of "Big Sam."

After graduating from Sam Houston State University with degrees in both math and physics in 1948, Adickes went to the Kansas City Art Institute. He studied painting there, and then went to Paris where he studied art for 2 years.

He returned briefly to Houston in 1951, but was soon off to Paris, Barcelona and Tahiti. Returning to his native land, Adickes taught art at the University of Texas in Austin.

In 1957, he lived for a year in Japan and then traveled extensively over the next 10 years in the Far East, Middle East, Europe, Russia and North Africa.

David Adickes is a wonderful painter, sculptor, musician and writer. He made his living primarily through painting until 10 years ago. His oils and sculptures are displayed in 10 major art museums across America and in many countries, as well as private collections.